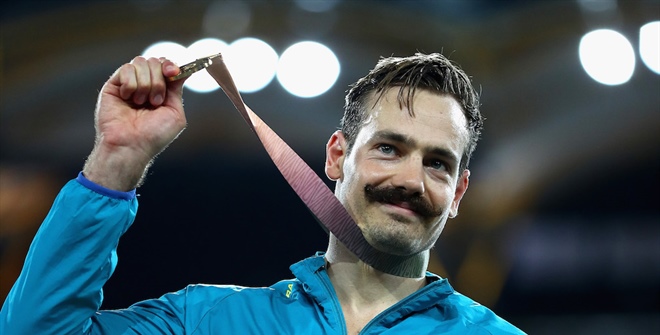 Evan O’Hanlon has set the Carrara Stadium ablaze with a sensational victory in the final of the men’s T38 100m on the second day of athletics at the 21st Commonwealth Games on the Gold Coast.

The five-time Paralympic and reigning world champion was a convincing winner in 11.09 (0.8m/s) as he added the only accolade missing from his extensive collection.

A recent hernia injury threatened to curtail O’Hanlon’s hopes for a home soil victory but the 29-year-old, who came out of retirement last year for a shot at Games glory, was not to be denied.

The Australian burst from the blocks and was never headed as he was an emphatic winner by some 0.24s over South African duo Dyan Buis (11.33) and Charl du Toit (11.35) who placed second and third respectively.

“I got up running and moving quite well and I felt like I was on for a good time, so I decided to push it. It felt really nice, my legs were moving under my body quite nicely, then it just all fell apart” said the Sydneysider who tumbled to the track after crossing the finish line.

O’Hanlon’s battle for the Commonwealth crown started off the track some eight weeks ago when he was diagnosed with a hernia. The Paralympian’s decision to hold off surgery until after the Games paid off. Just.

“Surgery takes 8 weeks to recover so there was no point having it. I am on some heavy painkillers and more than a roll of strapping tape covering me.”

O’Hanlon celebrated victory with his family trackside “To be able to go down and see my wife and my 7 week old daughter was pretty amazing”.

15-year-old Samuel Walker, the youngest member of the Australian team, placed sixth in 11.80.

Walker, whose time was a massive new personal best, said he felt “very honoured to represent Australia at the Commonwealth especially on home soil.”

Full wrap of the evening session of the second day of athletics to come.
The Corio Colossus Damien Birkinhead (Vic) finished fifth in the men’s shot put with a season’s best of 20.77m to equal his best result at a Commonwealth Games.

It was the same position the Victorian filled in Glasgow in 2014 but this time the depth of competition was much better. His best effort of the day came in the sixth and final round with a distance that would have been good enough for bronze four years ago.

Coached by 2006 Melbourne bronze medallist Scott Martin, Birkinhead opened with series with solid throws of 20.50m, 20.60m and 20.44m. He followed with two fouls before his best throw of the night, wrapping up his competition with a smile and a wave to the enthusiastic Carrara Stadium crowd.

As expected Tom Walsh (NZL), the recently crowned world indoor champion, won easily, but in a much less decisive manner than his recent form suggested. The Kiwi threw a relatively modest by his heady standards with 21.41m, to claim his first Commonwealth title by 27cm from Nigeria’s Chukwuebuka Enekwechi (21.14m). Canadian Tim Nedow emulated his bronze from 2014 with a season’s best of 20.91m. Yesterday, Walsh had set jaws dropping throughout the throwing world with a 22.45m which was the longest ever throw in a qualifying round.
Three Australian’s took to the track for a 25-lap tactical battle, as Celia Sullohern (NSW), Madeleine Hills (NSW) and Eloise Wellings (NSW) all featured prominently during the first half of the race.

A steady first 5000 metres, reached in 16:14.71 saw all three Australians in contact, with Sullohern and Hills toward the front of a tightly bunched pack.

The first signs of stress amongst the field appeared with seven laps remaining, as the pack slimmed to eight athletes.

Sullohern was unphased by the Kenyan front, continually pushing onto the outside shoulder of Ndiwa, reminding the leaders that more drastic action would be required to narrow the field.

“You can’t afford to be caught up in who else is out there” explained Sullohern, “You just have to run your own race, whether you’re at home on a club track or on the world stage, you’re racing the same distance”.

With three laps remaining, the pack of eight slimmed, as Hills fought valiantly to prevent the 10-metre gap to the lead pack from widening.

Without a definitive tactical burst of acceleration, pace remained unchanged at 75 seconds per lap, until Stella Chesang (UGA) rolled the dice with 500 metres remaining, as a penultimate 71-second lap split competitors into decisive groups.

Sullohern, visibly labouring, refused to give in though, committing every muscle to a developing battle for a bronze medal. An adoring home crowd stood to attention, bursting into rapture with each trying attack from Sullohern.

Finishing sixth, Sullohern’s personal best of 31:50.75 marked the second fastest run by an Australian woman in a Commonwealth Games 10,000m final, rocketing her to seventh fastest on the Australian all-time rankings.

Sullohern was complimentary of her teammates, as the Australian’s were the only competitors remaining on the track to cheer home Lineo Chaka from Lesotho, a twice-lapped athlete, finishing in 36:55.77 to a congratulatory embrace from all three Australian athletes.

“I just love racing with two Aussie girls who are such classy athletes” remarked Sullohern, “I think that’s the strength of Aussie distance running, we’re all there for each other and we’re all out there having a go, so it was lovely to stand there in a show of Aussie sportsmanship”

Hills worked visibly hard toward the finish, finishing eighth in 32:01.04, the fourth fastest time by an Australian woman at a Commonwealth Games.

Wellings fought courageously throughout the race, the national team veteran’s commitment was unwavering as she finished a brave 11th in 32:51.47.

In a race which electrified the home crowd, the top-six athletes were separated by less than six seconds, which was the second smallest winning margin in the history of women’s 10,000m running at the Games.

World Mountain Running champion Chesang took gold for Uganda (31:45.30), as Ndiwa’s work from the front was rewarded with silver and personal best of (31:46.36). Marcyline Chelangat(UGA) rounded out the podium in third (31:48.41).

Steve Solomon has burst into his first major international final since his breakthrough season in 2012 when he placed eighth in the London Olympic Games as a teenager.

The former Stanford University student ran a strong 45.55 to place third in his semi-final behind animated Isaac Makwala (BOT). The 29-year-old US-based sprinter goes into tomorrow night’s final as the sixth fastest qualifer.

The Botswanan is a strong favourite for the final as he crossed the line first in 45.00 some 0.38 clear of Jamaican Javon Francis who was the second fastest qualifier for the title race.

Decathletes Cedric Dubler (QLD and Kyle Cranston (NSW) embarked on an evening session including high jump and the 400m.

Dubler was frustrated by a best jump of 2.01m earning 813 points, placing third.

Refocusing for a gallant 400m sprint, pushing competition leader Damian Warner (CAN) throughout the home straight, earning a further 890 points with a 48.39 performance, just two tenths outside of his personal best.

Cranston recorded a seasons best leap of 1.92m in high jump, finishing eighth. Returning for the 400m sprint, the New South Welshman was fourth in heat one, racing to 49.94, amassing 817 points.

Canadian Warner retains his morning session lead at the end of day one proceedings, leading on 4509 points, as Dubler sits fourth on 4218 points, with Cranston 8th on 3933 points.

A Victorian trio made their bid for finals births this evening, as Linden Hall and Georgia Griffith both progressed successfully to the medal round which will be held on Tuesday night.

Hall’s race was not without controversy, as medal favourite Winny Chebet (KEN) found herself boxed in with 60 metres remaining and attempted a rash move into the outside lanes, clipping Hall’s heel.

The Australian managed to regain her composure after a stumble, fighting to the finish, salvaging the third automatic qualifying position in 4:08.64.

It was starkly contrasting race for Griffith in her semi-final as she was seeded alongside the World and Olympic 800 metre champion Caster Semenya (RSA), who allowed little tactical input, leading from start to finish.

Griffith found herself stuck on the inside of the eight athlete pack with 100 metres to run, a split-second decision to veer into lane two proved pivotal, As the crowd roared the 21-year old toward the finish line, Griffith gained confidence to pass all challengers bar one, sprinting down the home straight.

A thrilled Griffith claimed second, and a personal best of 4:06.41, thanking the crowd post-race, “I was in a lot of pain, but hearing all the noise really pushed me right to the line”.

Zoe Buckman began to lose contact in the final 80 metres of semi-final two, having to hurdle the tumbling Chebet proved a task too tall, finishing eighth in 4:11.78, and will not progress to the final.

In other events South Africa’s Akani Simbine created a huge boilover in the final of the men’s 100m to trounce Jamaican Yohan Blake, the pre-race favourite. Blake got out well but appeared to stumble at the 30m mark. That was all the South African record-holder needed as he got the lead at 50m and never looked back to cross the line victorious in 10.03.

Training partner Henricho Bruintjies won the silver medal in 10.17 as Blake held onto the bronze by the barest margins as the judges gave him the nod ahead of Nigerian Seye Ogunlewe with both recording 10.19.

Michelle-Lee Ahye from Trinidad and Tobago made history as she became the first woman from her country to win gold at the Commonwealth Games. She was an emphatic winner in 11.14 ahead of Jamaicans Christania Williams (11.21) and Gayon Evans (11.22).