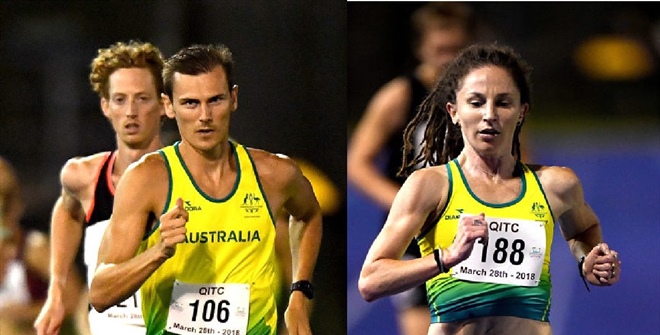 Bird-Smith’s triumph in Rio signalled a potential future successor to the dominant reign of South Australian Jared Tallent (SA). A talented junior sprinter, with a personal best of 48.99 over 400 metres, Bird-Smith gravitated to the walks in his later teenage years, dedicating himself to the discipline, resulting in three World Championship appearances, including sixth place in London, coupled with a personal best of 1:22:18.

Last season’s World Championship performance ranks Bird-Smith fifth on the Australian all-time list, one position behind his coach and father, David Smith. Ranked second this season in the commonwealth behind South Africa’s Leobogang Shange, a home-course advantage will be on factor Bird-Smith will attempt to utilise in what will be an enthralling gold medal bout.

Hosking, a 32-year old school teacher, spent four seasons on the Australian domestic road cycling circuit, prior to taking a final concerted attempt at Australian representation in a discipline he has drifted in and out of throughout a lengthy athletics career.

Missing out on Rio Olympic selection by 42 seconds, Hosking focused all his energy on the Gold Coast this season, making an ultimately pivotal decision at the team selection trial to stick with the lead pack. It was made in the first 500 metres of the twenty-kilometre race and paid a most rewarding divided, as Hosking recorded a personal best of 1:23:10 and Games selection.

After representative honours in 2014 (World Walking Cup) and 2015 (Summer Universiade). Rhydian Cowley (Vic) was unfortunate to miss selection for the 2015 IAAF World Championships.

In February 2018 at the Australian Championships 20km walk in Adelaide, he placed tenth, but importantly as the third Australian Rhydian secured Commonwealth Games selection.

South Africa’s Shange will provide Bird-Smith with a world-class problem, a personal best of 1:19:18 (2017) and a fourth-place finish at the 2017 World Championships is indicative of Shange’s ability. An event featuring nine sub-1:22:00 walkers, the Australian team will be challenged throughout the 20km Gold Coast route.

Prior to 2018, Smith had represented Australia in each available major championship, except for the Commonwealth Games, and so her appearance on the Gold Coast completes Smith’s set of representative debuts.

A domestic season involving three wins from three race starts, the 2018 10,000m national champion walked her third fastest time at the Australian selection trial (1:31:23) and will look to improve upon her 1:29:49 personal best out on the Games

Claire Tallent, a two-time Olympian with three World Championships worth of knowledge will add to the Delhi silver medallists cache of experience, as Tallent sets off on a 20-kilometre journey in front of an enthusiastic home crowd this week.

Montag previously represented Australia in memorable fashion as part of the 2014 bronze medal winning World Race Walking Cup team in China. Having set personal bests in both 5000 metre (21:32.68) and 10,000 metre (46:18.42) track events this season, the prodigious youngster is unlikely to limit herself in an experienced international field, watch for Montag and her Australian teammates to feature prominently this week.

Ranked third this season amongst Commonwealth race walkers, Alana Barber (New Zealand), will lead the international challenge with a personal best of 1:32:19 (2018).