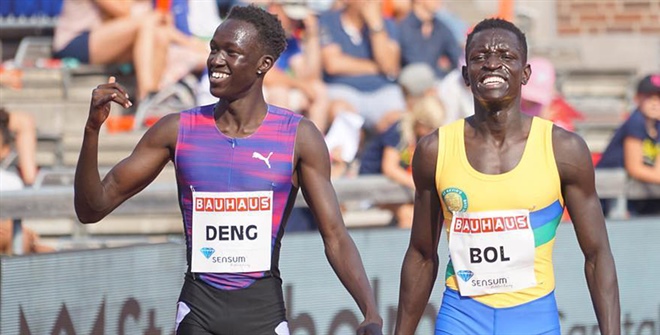 Peter Bol and Joseph Deng were in stunning form at the Stockholm Olympic Stadium overnight as they went one-two over 800m at the Diamond League meeting and threatened the long-standing Australian record in the process. The pair dominated race with personal best times of 1.44.56 and 1.44.61 respectively to become the fourth and fifth fastest Australians ever.

Their coach, Melbourne-based Justin Rinaldi, remarked prior to the race, that both two-lap specialists had a clear goal for their European season, to “make winning a habit”.
Both athletes must have received those instructions loud and clear, as Deng showed sage pace judgement, sitting off an over-enthusiastic pacemaker and clipping through 400 metres in 51.3 seconds.

Bol showed his hand down the back straight, moving to Deng’s shoulder as the pair drew level with 100 metres remaining, as the crowd roared the pair toward the finish line, keen sets of eyes in the stadium were directed firmly on the clock.

Bol made a final push for the line with 30 metres remaining, edging past Deng in the final few strides, with a time only ever bettered by record-holders Ralph Doubell, Alex Rowe and Jeff Riseley. The run was off the back of a tactical trip to the high altitude training hub of Flagstaff, Arizona which clearly paid dividends. Deng in finishing 5 hundredths behind his training partner consolidated his fifth place on the all-time ranking list, as he was the first Australian to run back to back sub-1:45 races.

The magnitude of Bol’s achievement was instantly clear, letting out a whoop of delight before embracing his training partner, the disappointment of an injury hampered domestic season replaced with a victory on one of Europe’s biggest stages.

The pair will race next in Tubingen, Germany on Saturday 16 June while Deng is on the startlist for the Paris Diamond League on Saturday 30 June.

Newly minted Australian 1500m record holder Linden Hall travelled to Stockholm ready to attack the four minute barrier. The assigned pacemakers caused a near-instant fracturing of the field, as a first lap of 60.0 seconds was well under the requested pace, Hall sat mid-pack and bided her time. A well-navigated final 700 metres saw Hall record another top-eight Diamond League finish, finishing in 4:02.89 to strengthen her bid for a Diamond League finals berth.

Henry Frayne recorded his fifth consecutive 8-metre competition, leaping out to 8.04m (+2.8w), placing seventh in a competition highlighted by swirling winds and the longest jump in all conditions since 1995, as Cuban Juan Miguel Echevarria’s 8.83m (+2.1w) leap sent the crowd into a frenzy.

Earlier at the Oslo Diamond League Stewart McSweyn ran a personal best of 28:05.37 to place second in the 10,000m and move to number 24 on the Australian all-time list.

The Tasmanian will race next over 1500m in Germany “to work on my speed then I hope to run a personal best over 5000m in the London DL.”

Ryan Gregson was strong over the last 300m in a tactical Dream Mile to place seventh in 3:58.47.

A season’s best 3:38.21 to Jordy Williamsz was good enough for eighth place in the 1500m.
Brandon Starc was equal sixth in the high jump with 2.20m, while Kelsey Barber threw 54.61m for ninth in the javelin.