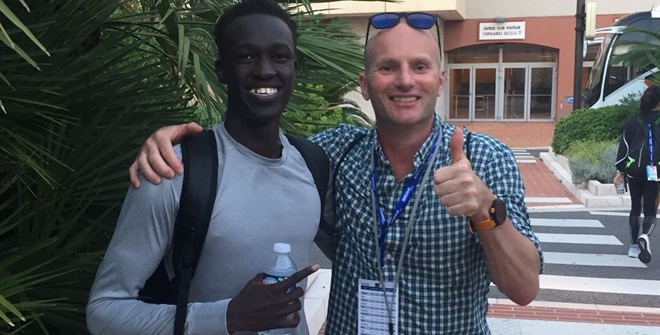 Joseph Deng has created history by breaking the long standing Australian 800m record with a sensational 1.44.21 at the Herculis Diamond League meet in Monaco. His performance, which was also a new Oceania record, took 0.19s off the record which has stood for nearly 50 years, first set by Ralph Doubell in 1968 at the Mexico City Olympic Games and then equalled by Alex Rowe in Monaco in 2014.

“It’s a great feeling. My target coming into the race wasn’t the record, it was just to run fast.” said Deng.

“I knew it was going to be a fast race. Justin (coach) said to stick in the top five, top six position and see what happens.”

“This is my last race of the season, so I’m done now. I’m back in Australia next week. “

At just 20 years of age, Deng, coached by Justin Rinaldi, has had a stellar season and the performance was his fourth time under 1.45 this year, the most ever by an Australian. In fact, the young Victorian-based athlete has run all those times in just 47 days.

Deng and training partner Peter Bol had made it known that the record was in their sights this season and have had several attempts this season with Bol coming closest before today’s race when he was 0.16s off the mark in Stockholm back in June.

Doubell’s time was the oldest Australian record in athletics with that honour now belonging to Peter Norman’s 200m from 1968. The Oceania record had stood for even longer as New Zealander Peter Snell ran 1:44.3 in Christchurch in 1962.

In a race that had it all, training partner come-pacemaker Harun Abda (USA), set up a perfect race for his training buddy Nijel Amos (BOT), taking the field through 400 far faster than the requested split. As 48.97sec flashed on the clock, Abda admitted post-race that whilst he had wanted to slow the pace, a brief look at the stadium screen indicated a large bunch right on his tail. Deng was in hot pursuit of the leading group, splitting a lightning 50.70 seconds, only ninth in a fiercely aggressive pack.

With minimal hesitation, Amos took over from Abda at 500m, continuing to push, as the crowd sensed the urgency of the pack, the stadium roared, watching 600m passed in 1:15.5, a time seen in a mere handful of memorable races.

Deng made a formidable move nearing 600m, sensing a split in the leading pack, the 20-year old remained ninth, but gained a valuable line of positioning approaching the bend, engineering his move up to seventh in the home straight.

Amos was ultimately a class above, his world leading time of 1:42.14 a meeting record, as seven athletes raced to personal or seasons bests, as three national records fell.

Joseph Deng has spent all season chasing the men’s 800m national record but he finally got it here at the #MonacoDL in 1:44.21 🔥@AthsAust pic.twitter.com/1YQdBAkP3g

In other outstanding performances on the track Beatrice Chepkoech shattered the world record in the 3000m steeplechase clocking 8:44.32.

The Kenyan, who finished fourth at the 2016 Olympic Games and at the 2017 World Championships, Kenyan won by more than 16 seconds,

Meanwhile Shaunae Miller-Uibo (Bahamas) became just the 10th woman to break 49 seconds for the 400m with a mind boggling 48.97.