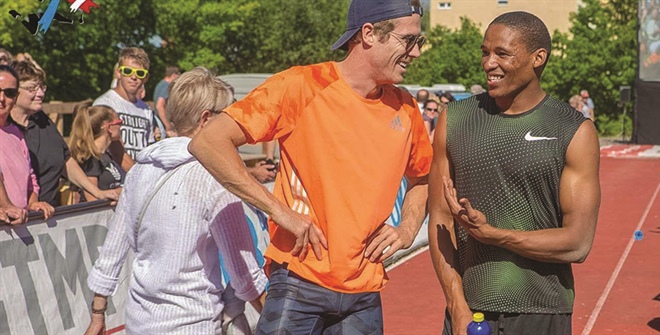 On a balmy 33 degree Parisian evening 800km away, three of Australia’s finest young talents took to the track and the runway. Joseph Deng and Peter Bol added to a season of consistency, with runs of 1:44.67 and 1:45.82 respectively, whilst Kurtis Marschall surpassed his ranking entering the competition, finishing 6th with a leap of 5.70m.

In a loaded 800 metre field, Deng and Bol set off in earnest, clipping through 400 metres in 51.2 and 51.4 seconds respectively, positioned well in seventh and tenth, both in front of the eventual winner Ferguson Rotich (KEN). Despite encountering traffic in the final 150m, Deng strode forward powerfully, crossing in 1:44.67 for sixth, a mere six hundredths outside his personal best, as Bol showed signs of fatigue in his second race in three days, to finish 10th in 1:45.82.

Kurtis Marschall entered a globally competitive field ranked 10th on performance this year, working his way through clearances at 5.45m and 5.60m to vault over 5.70m, eventually bowing out after three misses at 5.77m. In an enthralling competition, Sam Kendricks (USA) held off teenager Armand Duplantis (SWE), clearing 5.96m to Dulpantis’ 5.90m, narrowly missing a final attempted height of 6.05m.

Marschall is fast becoming a contender at the top end of world vaulting and in Paris left big names in his wake with Olympic champion Thiago Braz (Brazil), a former World Indoor Champion Konstantinos Filippidis (Greece) and 2013 outdoor champ Raphael Holzdeppe among them.

Bol and Deng’s two lap event was highlighted by a dominant final 200m for Rotich, closing in 25.5 to move from last to first, covering the entire field in stunning fashion. Melbourne-based coach Justin Rinaldi provided context, “I think the lack of a longer base hurt Pete today, as he didn’t back up as well from the mid-week race. Joe did everything right and I’m really happy with him running another 1:44 (just outside his personal best). Another little block of training and I’m confident they’ll run PB’s in Monaco”

In a meet which delivered seven world leading marks, the standout performer in Paris was Abderrahman Samba (QAT), becoming just the second man in history to break the 47-second barrier in the 400m hurdles, crushing all competitors in 46.98. Caster Semenya (RSA) declined the offer of a pacemaker, and raced away to the fourth fastest 800m performance in history, with a 1:54.25 effort that crushed her South African record by almost one second.