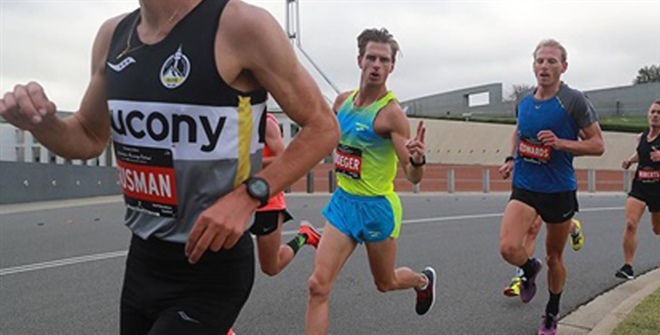 Arizona lies in the southwest region of the United States, home to drastically differing mountainous and desert climates, Northern Arizona is home to Flagstaff. Located at 2,130m above sea level, the cold mornings and warm afternoons provide the perfect environment for distance runners from across the planet, who flock to the city of 70,000 for the hundreds of kilometres of running trails and renowned elite running community.

A variety of Australian training groups are making the midyear pilgrimage to Flagstaff, one of whom is a three-time Paralympian, owner of multiple T46 world records and an unrivalled work ethic. Having long blazed a path of middle-distance dominance, Michael Roeger returns to Flagstaff for his fifth stint at altitude, looking to reap the benefits brought on by the low oxygen levels at heightened altitude. This environment forces an increase in internal erythropoietin production in the kidneys to adapt to the new stress, resulting in an increase in red blood cell production and haemoglobin mass (a metalloprotein responsible for the efficient transport of oxygen).

Canberra-based Roeger will be joined by fellow-athletes from the capital as well as others from throughout Australia. The likes of Linden Hall and Luke Mathews are already in Flagstaff preparing for the Eugene Diamond League at the time of writing, while Australian representatives Peter Bol and Georgia Griffith will make the trip to Flagstaff too. Bol will experiment with altitude training for the first time.

Roeger says “This year we have a mix of guys coming along to Flagstaff from Canberra, Melbourne and Sydney, which is going to be great along with some pretty handy locals, including my training partners, Sam Harding, Jaryd Clifford and Jordy Tyler will be there along with Matt Clarke who will help as a guide for Jaryd.”.

World Under-20 selected Clifford will join Roeger in Flagstaff as he prepares to take on the world’s best juniors in Tampere, Finland in July. Clifford is a regular training camp partner of Roeger and also coached by Roeger’s now six-year coach and mentor, Dr. Philo Saunders.

An exercise physiologist by trade, Saunders has long walked the corridors of the AIS, placing himself at the forefront of Australian sports science advancements, passed onto his growing group of world-class charges.

Saunders began coaching Roeger following the 2012 London Paralympics, “The impact he has had on my career is truly nothing short of extraordinary. This guy has taken me where I thought was impossible, I’ve smashed WRs, I’m now a 3:45 1500 metre runner, will go sub 14mins in the US for 5k and broke 30 mins on the road for 10k” explained Roeger. The partnership is one that extends past the physical programming required to build a truly internationally competitive athlete.

“No one would have believed me 7 years ago if I said I would run those times – but Philo. He instils this belief and confidence in his runners that is hard to get from anywhere else. I’ll be forever indebted to him”, remarked Roeger, now a stalwart of able-bodied national championships, paving the way for young trailblazers such as stablemate Clifford. The T12 (vision impaired) 18-year old is the only para-athlete to qualify for an able-bodied World Under 20 team in Australian athletics history.

Roeger will spend three weeks in the sleepy mountainous city, racing in Oregon at the Portland Track Festival with his 5000m world record of 14:06 in mind, a historically strong distance meet, a sub-14 minute clocking looms large in the 30-year-old’s goal setting.

Flagstaff’s attraction as a distance running city includes the benefit of group training, with athletes rarely in short supply of training partners to log the sometimes monotonous longer sessions.

“It doesn’t matter what time of year you go there will always be plenty of elite guys around, one of my favourite sessions is the long run. Each Sunday it’s in a different location and there will be 30+ runners at the start all doing different distance, usually out and back with a drinks truck in toe, remarks Roeger, further describing the mental benefits gained through training with some of world’s very best.

“For me, it’s a very motivating and refreshing camp to go on, everyone is there for the same reason to get fit and get faster and is just bloody exciting!”

Without a global championship to target in 2018, Roeger views the year as one of great possibility, “I‘m really enjoying racing again with a focus on the longer distances. I will race the Gold Coast Half Marathon on July 1st, hoping for a big one after a solid debut in Canberra. Then look at some cross country races in SA, followed by National Cross Country Championships in August.”

Whilst the 1500m and 5000m distances have seen Roeger collect a Paralympic bronze medal and multiple IPC World Championships bronzes, the 30-year old isn’t afraid of the longer distances, “I’d like to run the City2Surf as I’ve never done that, then maybe if I get through this next block of training well, a debut in a marathon later in the year.”

With world records at both track distances he has targeted in the last few years, who would bet against Roeger reaching the same rarefied air on the roads.