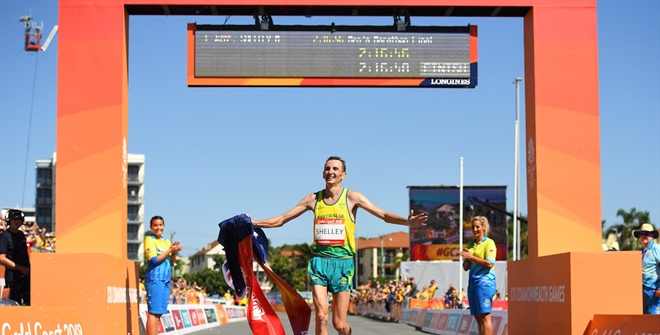 Michael Shelley (QLD) completed a historic marathon double, as the local Gold Coast resident became the first Commonwealth champion to defend his title since Rob de Castella won both 1982 and 1986 editions of the marathon, running to an emotional victory in 2:16:46.

“It’s very special, my first marathon win in Australia, I can’t believe it”

“I’m a born and bred Gold Coaster. I was born in the old Southport Hospital. I live here and train here all the time.”

Teammate Liam Adams (VIC) improved on his seventh-place finish in Glasgow, embracing Shelley in a congratulatory embrace after finishing fifth (2:21:08).

Similar to many major championship marathons, the familiar faces of Shelley and Adams found themselves near the front of a lead pack moving tactically through five kilometres in 16:39.

Showing signs of frustration with the slacking pace, Callum Hawkins(SCO) took the lead, clicking off a 15:30 split from 5 to 10-kilometres, encouraging the lead pack to embrace an honest pace.

Hawkins lead continued alongside the extent of the Kenyan and Ugandan teams, as Shelley tucked into the pack, biding his time, whilst Adams ran on the shoulder of Hawkins.

The main turning point at 25-kilometres signalled a change of intent, as Hawkins bravely shot to the lead once again, developing a significant gap, as a 15:20 split from 25 to 30-kilometres put Hawkins 41 seconds ahead of Shelley at 30-kilometres.

Hawkins bravery in temperatures touching 28-degrees was stunning, as he covered 30 to 35-kilometres in 15:32, only for the cruellest elements of dehydration and heat exhaustion began to emerge.
The gallant 25-year old began to swerve across the open road, making a visible attempt to avoid stumbling into the gutter at times, demonstrating incredible resilience after repeatedly falling until unable to stand at 40-kilometres.

Hawkins 5-kilometre segment from 35 to 40-kilometres, substantial falls included, was covered in 16:32, compared to Shelley’s 16:53 over the same course section.

With 2km to go Hawkins collapsed and was unable to get back on his feet.

Shelley remarked later about the gruelling conditions and the effect on everyone.

“I was starting to cramp up myself so it was quite difficult at the time.”

“It did throw me a bit, I was starting to feel pretty bad myself, and I thought I could end up on the road too in 500m.

Hawkins was taken to hospital for a full medical review and Team Scotland staff and Hawkins’ personal management team later reported that he was sitting up and talking but suffering severe dehydration and undergoing further tests as a precaution.

Shelley completed his final two-kilometre segment absorbing the encouraging cheers of local spectators, draping himself in the Australian flag and embracing long-time coach Dick Telford in a tear-filled embrace.

Shelley paid tribute to Telford “I couldn’t ask for a better coach. He’s like a second dad in many ways.”

“The support from the crowd was amazing. There are a lot of people I need to thank, especially everyone on the Gold Coast who came out to support the Commonwealth Games. I can’t thank them enough.”

With seven of the starting field unable to finish, silver and bronze went to Ugandan Solomon Mutai(2:19:02), and Scot Robbie Simpson (2:19:36), as both athletes completed patient tactical approaches, best enduring the final kilometres on the punishing Gold Coast course.

Lisa Weightman and Jess Trengove continued the strong tradition of Australian marathon success at the Commonwealth Games with silver and bronze in the gruelling hot and humid conditions on the Gold Coast on Sunday morning.

At the age of 39 years, Weightman became the oldest Australian woman to win a medal in athletics as she went one better than her bronze in New Delhi in 2010

The South Australian Trengove meanwhile emulated her performance from the Glasgow Games in 2014.

Weightman was thrilled with her result “A silver medal for Australia you can’t be sad about that.”

“I’m happy that I am done. The pace was choppy. Surging here and there. We all knew that it was going to be on at 35/36k. I did my best to stay on but couldn’t quite get the gold but I am pretty pleased with silver. I gave it my very best.”

“It was hot, no question about it but we prepared for that. And you do the best you can with what you’ve got.”

The women set off at 7:20 am, with temperatures already approaching the low 20’s, suggesting weather would become a decisive factor in the latter stages.
Trengove and Weightman formed an early lead pack surrounded by Namibian, English and Kenyan competitors.
Without any early major moves, Trengove and Weightman appeared happy to dictate proceedings, sharing lead duties up until 25 kilometres, as halfway was passed in 1:17:31.

Kenya’s Sheila Jerotich made the first definitive move to break the race open, stringing the lead pack out into single file from 25 to 30 kilometres, developing a lead that separated both Australians from Jerotich and Namibia’s Helalia Johannes.
Jerotich’s lead was short-lived, as minutes later, the camera’s returned to show Jerotich fading rapidly in fourth, as the plucky Australian duo returned shoulder to shoulder with Johannes at 35 kilometres, as a scintillating finish developed.

The Namibian gathered herself, launching a final bid for gold, leading by 19 seconds at 40 kilometres, as a 17:34 5km segment finally split Johannes from Weightman and Trengove, as the Australia duo covered the same course section in 17:53 and 18:16 respectively.

Johannes went on to win the first by a Namibian woman at the Commonwealth Games in a race dictated by oppressive heat and humidity that took a toll on the entire field.

Moloney, substantially affected by the heat, showed immense determination. Well outside her personal best, Moloney’s race became one focused on a point of pride for many marathoners, finishing under any circumstance. Moloney embodied the marathon spirit, staggering over the line in 16th place (2:58:54), immediately held up by medical staff, exiting the finishing chute in a wheelchair.

Reflecting on her career to date, Weightman said “To think that I have been to two Olympics, three Comm Games, two Comm Games medals and a world cross medal I pinch myself thinking I have done all that. I’m 39 now and I have had a long and good career and I am still going. I can’t complain.”

But retirement is not on the radar. “One day running will retire me. Runners keep on running. Why make any retirement announcement? I am getting faster. I’m competitive.There’s no reason to drop the green and gold anytime soon.”

She congratulated Weightman and coach Dick Telford observing “they executed that beautifully and it very well deserved.”

The last word of the Games goes to Trengove who aptly summed up the sentiment, thanking her fellow teammates who got the momentum going earlier in the week at Carrara Stadium and in the Race Walks “ We came here with the biggest uphill slide, with all the momentum from the Aussie success so thank-you for setting the bar high for us.”

The next Games return once again to the UK in 2022 where Birmingham will play host.