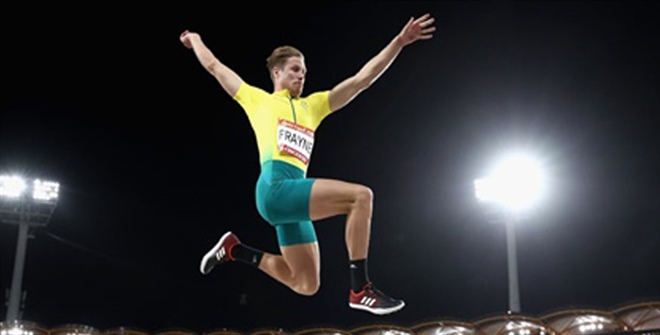 In a big weekend of international competition coming up, two of Australia’s most seasoned international competitors Henry Frayne and Ryan Gregson head to Stadio Olimpico in Rome for the next leg of the Diamond League while Joseph Deng will race over 800m in Hengelo in his third European campaign.

Coach Gary Bourne, who has led Australian record-holder Mitchell Watt and Frayne to the podium at several global champs, said it will be a cautious approach to the competition as the Commonwealth silver medallist has a long history of problems with injury.

“Henry has a 2.1cm leg length difference that results in hamstring, back and calf issues. We have an agreement this year that we are taking a longer-term approach to this season and toward Tokyo in 2020.”

“He left Australia in reasonable, but not his best shape. In Shanghai, he was to have only three or four jumps. He passed round four and then round six when the rain was heaviest. Round five is when several were injured (including Henderson) and six is when the Chinese jumper broke his foot and dislocated his ankle on a slippery board and Manyonga hurt his ankle.”

“In Rome we are planning four to five jumps depending on conditions how the competition pans out. In Stockholm (6 June) we plan for five to six, depending on how he pulls up from Rome and again on conditions. Again, if it’s wet we will have fewer jumps.”.

Looking beyond Rome, Bourne shared some insights into the approach needed for an international campaign.

“Overall we planned just three meets in this almost 5-week tour. So far that has worked well for him. Good form does not mean an increased capacity for competitions. We will be patient and if the plan continues to work and he remains healthy and injury free, the big jumps will come when they matter most – in 2020”

“I feel the most valuable trait for an athlete to have to compete successfully on the circuit is self-belief.”

“Travelling athletes can get off track by forgetting the reason they came to Europe in the first place – to access high-level competition, be excited by it, have success in that environment and improve their PB.”

Gary Bourne’s insights into the challenges that athletes face when living, training and competing overseas will be explored in depth over the coming weeks in a multi-part series about athlete preparation.

Gregson takes to the Rome Olympic Stadium following a maiden IAAF World Challenge victory in Osaka, combined with fond memories of a 2016 visit to Rome, resulting in a third place finish behind race winner Manangoi.

Commonwealth Games finalist Joseph Deng opens his international season in The Netherlands on Sunday, racing over 800 metres at Hengelo in the FBK Games.

Discussing the difficulties commonly associated with travel, training and international correspondence, Rinaldi takes a measured approach to the European season.

“In terms of travel, I have always aimed to give the athletes at least 10 days between travelling to Europe and racing. This allows the athlete to adjust to the time zone, plus get in a few hard sessions before racing. Deng as no trouble sleeping, so that is never a major concern.”

Deng has based himself in Tübingen, a training base in southwest Germany, “Basing ourselves in Germany means that we don’t have to adjust his eating habits, as the food is very similar to what we’d normally eat. I think Joe learnt a lot from his first trip to Europe in 2016 when he competed at the World Juniors that he is able to put in practice for this trip” remarked Rinaldi.

An athlete who grabbed headlines with a stunning 1:45.71 front-running performance at the 2018 Australian Championships, Rinaldi was quick to reinforce Deng’s controlled, yet aggressive approach to the two-lap race will continue in Europe.

“In terms of racing, it’s important to hit the ground running and attack the race. We won’t use this race as a rust buster, as it’s a wasted opportunity when you are competing at this level. Without going in with a time goal, Joseph is hoping to run a personal best first up and will aim to put himself as close to the lead as possible, regardless of the pace.