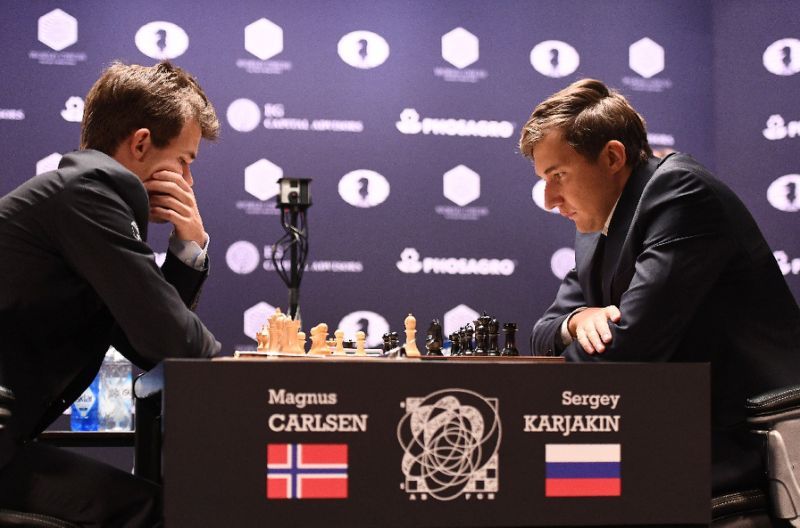 In a small auditorium located in the Seaport District of Lower Manhattan, two men possessing supreme intellectual and computational capabilities are slated to do battle for the title of “FIDE World Chess Champion”. The match is a best of 12 series, with each match scored, 0 points for a loss, half a point for a draw, and 1 point for a win – with the winner declared the individual who reaches 6.5 points or more first.

Chess is a sport which shares unexpected similarities with far more popular televised sporting pursuits. The games often take a great deal of time, whilst not to the extent of a cricket match, the current World Championship series is through 5 games, with average play time close to 7 hours per game. A sport of cricket’s ravenous world-following may appear a foolish comparison in regards to spectator statistics, but chess should not be underestimated. The official World Championship website offers paid live, commentated streaming, of which well over a million viewers have purchased, with popular sites and applications such as Chess24, chess.com and lichess recording download numbers ranking chess as one of the most popular computer games globally. Further strengthened by the governing global body “Fédération Internationale des Échecs” (FIDE) boasting 185 member nations.

Whilst the game duration may intimidate or bore many, the two personalities set to do battle for the title of World Champion, accompanied by a 1 million Euro prize, is where the game becomes accessible for those less initiated in the specifics of the game.

It is important to note, that chess is played globally with a points ranking system, similar to tennis, players compete in tournaments to earn Elo ranking points, which are allocated based upon the strength of a player relevant to his or her competitors defeated. The system ranges from 1200 to 2700 points and above, with “novices” considered as 1200 point players or lower, whilst Carlsen and Karjakin have current respective Elo rankings of 2853 and 2772.

Once you’ve wrapped your head around that concept, an understandable line of curious contemplation develops, who are these two individuals vying for the title of world champion?

Magnus Carlsen is the Pele, Tendulkar, Jordan, Bekele equivalent of Chess, a grandmaster at 13 (the 3rd youngest in history), Carlsen has held the title of World Champion since 2013 whilst being ranked world number 1 since 2010, paired with his Elo rating of 2882 (2014), he is the highest ranked chess player of all time.

Carlsen’s celebrity is substantial, both in the chess world and in his home nation of Norway, with 3 million of Norway’s 5 million residents tuning in to the Norweigan television coverage of the current World Championship match, Carlsen is a man set to well and truly drag chess into the mainstream of sports coverage. The 25-year old Norweigan’s playing style is characterised by the level at which he has studied the game, rarely relying on the same opening twice, Carlsen is feared for his prowess in “endgame” situations, a position of extreme difficulty among grandmaster’s, as one of two superbly skilled individuals needs to make a direct blunder, or be outsmarted with a ruse of sorts, to lose a game.

In a sport rife with computer analysis, Carlsen is best typified by a statistical measure known as “nettlesomeness” – a rating which identifies a players ability to cause opponents to make mistakes, largely due to Carlsen’s creatively mixed strategies, which pressure opponents to play through irregular situations, subsequently rendering Carlsen a frighteningly difficult opponent to ‘study’ or ‘plan’ for.

Carlsen’s opponent was determined via a system similar to those used in combat sports, with the “challenger” having to win through a number of tournaments, the specific “World Chess Candidates” tournament, explained thoroughly in the short documentary below.

The winner of the “2016 World Chess Candidates” tournament was Sergey Karjakin, a politically polarising figure. Karjakin, 26, born in Ukraine, has represented Russia since 2009. A worthy opponent, the stammering Russian caused controversy in 2009, seen as abandoning Ukraine, a native of Crimea, Kajarkin developed pro-Putin political views, and moved to Russia to receive sponsorship from the FIDE Vice President, President of the Russian Chess Federation, Andrey Filatov. The move enabled Karjakin access to better training, but resulted in the divorce a wife, a highly politicised change of nationality, and an immediate assertion of support for the Russian annexation of Crimea, all predictably controversial decisions, given Karjakin, the youngest Grandmaster ever, held a societal position of patriotic pride for many Ukrainian’s.

Karjakin has well and truly felt the glare of international spotlight throughout his career, existing in a pressurised sporting environment since achieving the title of Grandmaster at the age of 12 years, 7 months, which remains the current world record.

The current World Championship series of matches can be rapidly summarised by the following image.

Karjakin has frustrated Carlsen throughout the series, with 5 consecutive draws highlighting the Russian’s ability to defend under pressure. Karjakin has quickly been labelled across twitter as the “new Russian Minister of Defence”, as Carlsen (pictured above), has become increasingly snappy and aggressive at post-game press conferences. Kajarkin heads into the 6th game with a sizable advantage, as playing colours are alternated, given white’s ability to move first, the Russian is suspected to employ a bolder strategy in the next two games as he plays as white, whilst Carlsen has vowed to take a far more aggressive approach playing as black, as his frustrations reach a veritable boiling point.

Yes, the games have press conferences, often comprehensive in nature, requiring players to explain key positions and why they made a particular move, an intellectual post-mortem of sorts.

Notably, the sponsor signage behind the players is adorned by the logo of the two main sponsors, Phosagro and EG Capital Advisors. If ever an indication of the sport’s popularity or patriotic pride was required, Phosagro (a Russian phosphate producer) posted revenue figures in 2015, just shy of $2 billion US Dollars, whilst EG Capital Advisors manage $3 billion USD in assets. Prime indicators that the worth of a sport is not determined or defined by its play style or duration, yet is constantly under revision, improvement or decline, based upon the personalities and competitive stories that exist within a sporting arena. A concept a few unnamed sports might do well to take note of.

If this all sounds like something that might be interesting to you, yet you don’t feel like learning algebraic notation to follow the game, visit https://chess24.com for brief highlight videos of each game, or https://www.reddit.com/r/chess/ for entertaining game commentary and schedules.